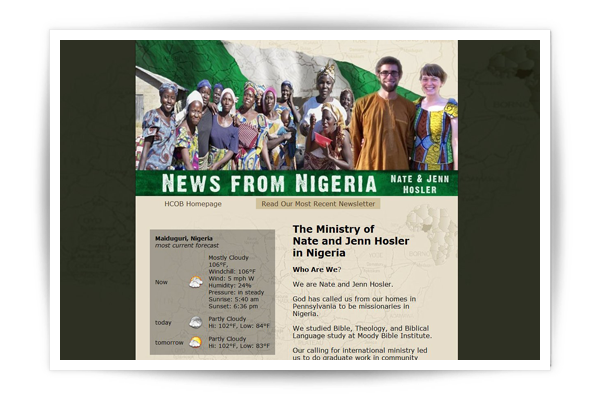 This site was created to facilitate communication with Nate and Jenn Hosler, missionaries to Nigeria serving in the EYN Peace Programme. The site operated for 2 years until the the Hoslers returned to the United States in 2012. It remains available as a record of their ministry for Christ in a conflicted nation.

I created this site and I alone was responsible for maintaining the site and posting new content as it became available from the Hoslers. Because of this I became a sort of liaison between the Hoslers and Hempfield Church of the Brethren. Everyone on both sides of the Atlantic was very pleased with this website when it was active.

I custom created software for this site as well as installing third party scripts to help us communicate with and better relate to Nate and Jenn. For example, I put a weather script on the home page to remind us that Nate and Jenn were not just across the county from us. We would log on in February and see that the Hosler’s were experiencing 108 degree temperatures. Because of comments I received, I believe that the website provoked people to pray for Nate and Jenn, and even raised their financial support a bit.

While I’ve enjoyed all of the sites I’ve designed, maintaining this site was the most personally enriching site I’ve built to date. I learned a great deal about the culture of Nigeria and the terrible conflict between Christians and Muslims living there.