The East Petersburg Faith Outreach hosted its first annual Outbreak Festival on Saturday,September 7, 2013 in the East Petersburg Community Park. Pastor Kent Rice contacted me in the weeks prior to the event to create a teaser for it. 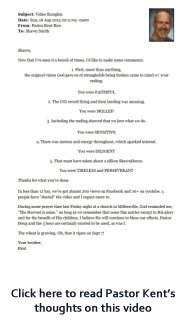 The video shoot was what videographers call a “run and gun,” meaning I was called, told to grab my things, and meet at the park to shoot a teaser that was largely to be developed as we went. So, without a crew, without knowing who would be on hand, and with only a sketchy idea of what we were doing, I headed to the park.

The general rule of thumb for video production is that the more time you put into planning the better your end result will be. We had little to no time for planning, but we managed to put together a fun and interest-grabbing video that is sort of a Monty Python meets Braveheart. The concept for the video was provided by Pastor Kent, and the final edit exceeded Pastor Kent’s expectations. (You may click on the image of the letter to read Pastor Kent’s thoughts in his own words.)

My responsibilities during this production included: